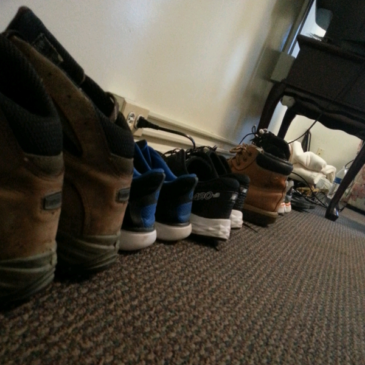 I remember the first time I laughed so hard in public that I snorted (and it was in middle school, no less). I was humiliated. Granted, I did live teetering on the edge of awkwardly uncomfortable and total humiliation. And all it took was a green thing in my teeth or bumping someone in the hallway or running into a door (yes, that happened) to plunge me into the depths of wanting to disappear.

Needless to say, no one was more relieved than I to have middle school pass me by. And even though I gained more confidence as I grew into my long, freckly arms and learned to embrace my awkward sense of humor, that feeling of having to keep myself together never really went away. There was always that thought in the back of my mind that one wrong step, one door frame that’s just a little more narrow than you initially think, and the image I worked years to forget would instantly flood back as my friends would step back and look down at me, shaking their heads or raising their eyebrows in judgement.

Here’s the thing though, perfection is exhausting. There’s a fear in perfection, in keeping it together. Shame lurks in the pieces of yourself that you hide from those around you, mocking the light. It laughs at the thought of vulnerability, it ridicules the desire for transparency.

And even though I don’t know you, yes you, reading this on your phone, taking a “study break” that’s now two Netflix episodes deep – I know you. I know you’re not meant to hide, to mask, to fake. Every single human being on the planet was created with a longing for the intimacy that only comes from being known exactly as you are, awkwardness and all. We are glued to storylines that portray it, we sing songs about it, we are captured by it because it’s ingrained into our DNA. It’s written in the fabric of our very beings. We long for the freedom to “let our hair down”, to take off our shoes in the context of community. To sit on a couch and ugly cry as Derek Shepherd makes that stupid U-turn (for all our Grey’s fans). To throw off the bravado that’s impossible to uphold and admit the struggle, the fear, the junk.

It takes courage to step into the light and open-handedly bare your mess with messy people. There’s risk in relationship. Spoiler alert: worth it.

Cru is a place where messy people come to walk out of the darkness of shame and toward Jesus, together. Cru is a place you can take your shoes off, let your hair down. There’s no pretense, no perfection.

Don’t believe me? Come to Fall Retreat. Come spend a weekend walking towards Jesus with 200 other college students whose faces are turned in the same direction. Come slide down a tube into a pit of mud. Laugh until you snort. Sing loudly and off tune. Eat as many marshmallows as your hollow stomach can handle.

Don’t believe me? Prove me wrong. I dare you.

Friendship is born at that moment when one person says to another: “What! You too? I thought I was the only one.”